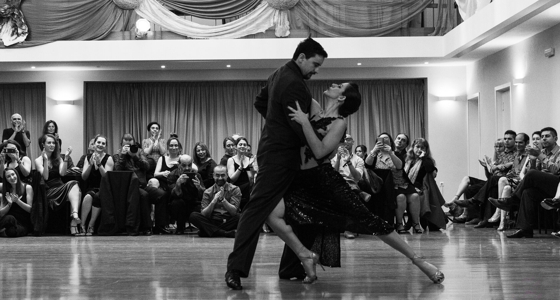 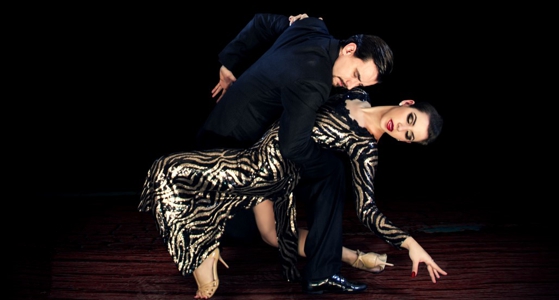 They made their first appearance together at Herodus Atticus Theatre with Mora Godoy (2016) and later on they appeared at Pallas Theater next to Geraldine Rojas – Ezequiel Paludi. Moving forward, they participated in the 14th Tango Fiesta Patras and next, to the Syros Tango Festival, where they also presented their work at the Apollo Theater under the supervision of group choreographies by Max Van Voorde – Solange Acosta. In September of 2017 they were selected to become members of the “Tangueros del Sur” Company, where they presented at Herodus Atticus Theater the show ‘Romper el Piso’ under the artistic direction and choreographies of the legendary dancers of Tango, Natalia Hills and Alejandro Aquino. Furthermore they have also participated in 4th Tango Lovers Festival , Ensueños Tango Festival and 16th Tango Fiesta Patras. Additionally in summer of 2018 being already members of the company Tangueros del Sur they travelled giving performances all around Greece. In August of 2018 they have been in Buenos Aires where they have been invited to dance in various milongas.In September of 2018 they have been honored to dance for third time at Herodus Atticus Theater with the company Tangueros del Sur with the presence of the muse of Astor Piazzola ,Amelita Baltar in the first worldwide choreographical tango opera Maria de Buenos Aires.

Gabriel Marino came to Greece from Argentina, where he was born, carrying a lot of experience in Argentine Tango. In July of 2011 he took the first place in the European Championships ( Torino,Italy ) representing Greece and he was two times finalist in the world s competition in Argentina, in tango salon.In Greece he teaches, dances, choreographs and travels all over the world for seminars and shows.He was honored to dance not only at many world famous theaters such as Teatro Colon de Buenos Aires( 2002 & 2004 ), Palais de Versailles (Tangokinesis 2007 ), Herodes Atticus (2016 & 2017 ) but also to a lot of Casas de Tango such as Candilejas, Cafe Tortoni, Caminito. He was a member of Compañia Tango Malambo, Tangokinesis and other tango companies. In 2012 he founded the by “El Abrazo” dance school. His main purpose and vision was to create a place devoted to the original tango, as it’s danced and taught in Argentina.

We are in the unpleasant position to announce to you the postopone of the 7th Tangolovers Festival 2023.

Unfortunately, the Venue we collaborated with, for the last years, changed management and terminated our agreement in short notice.
We did our best to find another Venue that meets the requirements of our Festival but it was impossible. Due to the limited time we have till February 2nd, 2023, it would not be appropriate to encourage people from abroad to book their flights only having to cancel them later.
That’s why we had to take this decision now.

However, we will not cancel it, we will transfer it for May 2023!!! Soon we will announce the exact dates! Those who did the registration and paid already will be contacted regarding the return of their money.

Thank you all for your understanding and we hope to see you in May!